An increasingly important application of basic behavioral and biological science is the development of mathematical models that predict performance and improve health and safety in the real world.  IBR President Dr. Steven R. Hursh is widely recognized for his development and application of innovative biomathematical models, including in the area of fatigue and human performance.  His patented Sleep, Activity, Fatigue, and Task Effectiveness (SAFTE™) model has been rigorously evaluated in the peer-reviewed scientific literature, validated and calibrated by the US Department of Transportation as a fatigue risk management tool, accepted by the US Department of Defense as the standard warfighter fatigue model, and is currently used by the US Federal Railroad Administration, the Federal Aviation Administration, and the Federal Motor Carrier Safety Administration to retroactively assess and prospectively forecast fatigue in transportation operations.  At its heart, the SAFTE™ model predicts cognitive performance effectiveness as a function of several interacting variables such as hours of continuous wakefulness and amount of prior sleep. 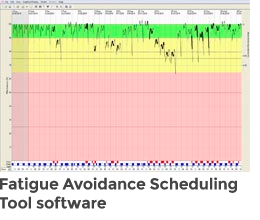 The SAFTE™ model and associated Fatigue Avoidance Scheduling Tool (FAST®) software have been applied to analyze, predict, and prevent fatigue-induced risk in a variety of operational settings, including transportation, shift-work, military, and space exploration.  IBR’s recent modeling projects include analyses of pilot fatigue and error for the FAA, railroad accidents for the US Federal Railroad Administration, unit-level fatigue for the US Army, Astronaut sleeping difficulties for NASA, and proposed shift-work schedules for the National Petrochemical and Refiners Association and the FAA’s Air Traffic Controllers office.